friday night: everything sold out except upper tier. these are still some of my favorite vantage points for our show.

sunday grand finale: only 7 mezzanine seats left. these are the last floor level seats for our entire run. grand tier center nearly sold out. plenty of upper tier seating. everything else sold out.

thx to all of you who have bought tickets, and thx to all of you who are going to buy tickets. i know that there will be people out there in spite of our best efforts who didn’t get the message that our tickets were for sale. it’s probably going to be mostly college students and high school students. the reason we’re only raising our ticket prices $5 is because we want to reward the early bird buyers… there has to be some reason to call it early bird, right?… but we’re not trying to make money off ‘our kids’. this show is being totally self produced. by that i mean, though it would not have happened without jeff mannel’s help and our church families being made up of enough of you who want to see the show; we’re not supported by the conference in any way. we have a small group of donors/patrons and ticket sales as the only means of producing this show. we’re like any legit theatre company i’ve ever known (well there are government grants and some other subsidies for groups, we’ll take that when we can get it). we’re hoping to be able to do many projects like this. but for now, thank you st. louis and jeff mannel especially for hosting us. and thank you roger lamb and mike taliaferro for the icoc websites and message sending help you’ve afforded us.

but for now, 3 more days before ticket prices go up. saturday matinee is almost a totally sold out show on it’s own. after that less than a theatre full of tickets remain, spread out over the other 4 shows, all in the upper tiers, except for these seven seats in the mezzanine on sunday. : ) 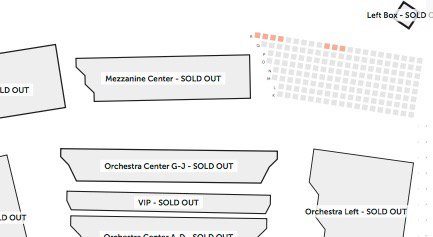