and when the smoke cleared…

so cmack was in front on buzz’s 95 nostalgia. greg was following on my thruxton and i was stuck on the ducati i’d rented for greg; once he sat on my triumph he wouldn’t get off so i rode a gt to canada and back. i’m a nice guy. 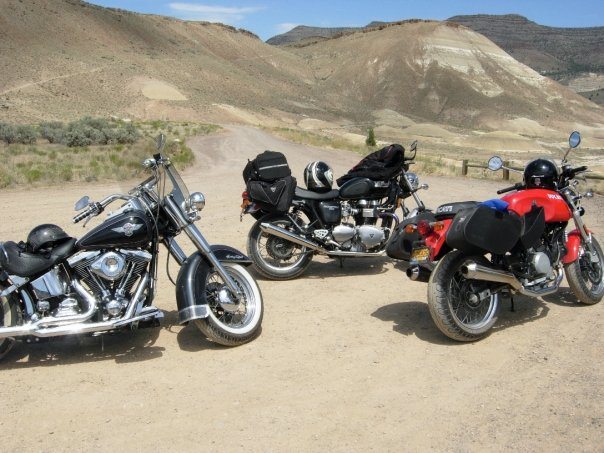 we were just east of fossil and cmack was whipping the nostalgia. but on a quick left through a little gorge he hit some gravel and ran off the road, creating a mushroom cloud of dust. i was at the end of the line and was able to see cmack disappear around the curve and greg hit his brakes hard and fast; immediately i saw the cloud on the side of the road and knew there was a tangled mess of harley davidson at the bottom of that dust and also, i feared, a dead buddy.

since i was in the rear i was able to stop quickly right at the wreck. greg had braked passed cmack, so before he could get turned around and get back to us i was getting off my bike and rushing for what was still billowing dust. i’m not exaggerating; you couldn’t see through what the 800 pound plus bike had thrown up in its crash. but i’m equally not exaggerating when i tell you what happened next. as i rushed from my bike, only steps away from the carnage; the smoke cleared and there stood… STOOD… cmack. he was still clinching the brake/throttle grip of the handlebars, which were now broken in half, in his hand and stood there like a super hero walking out of a nuclear holocaust. i walked straight up to him and, not sure why exactly, i  kissed him right on the mouth. he got this stupid grin on his face and to this day i have no explanation for why the adrenalin and fear prompted such an intimate response from me. but, he did grin. 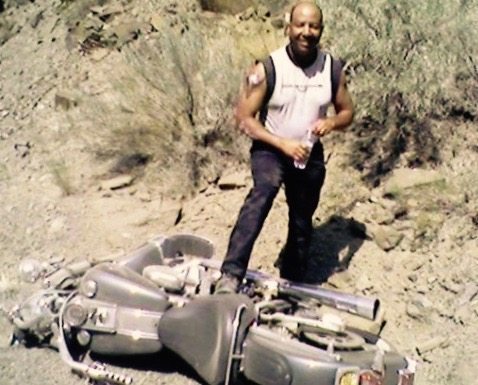 this was a pretty desolate stretch of road but several trucks and cars came by; all stopped to check on us. there’s usually a sweet code of concern out in the oregon wilderness. soon a guy in a pickup truck pulling another old pick -up stopped and yelled out the window, ” i can fix that!” he became the ride for both the broken bike and cmack all the way to baker city. and by the time we got to baker city cmack had sold the guy the bike at a profit and then would hop on the back of the ducati with me, ride to boise and rent another harley and keep on going. he had cracked ribs and a strawberry stinging on his arm… and a demolished helmet (keep that in mind helmet less motorcycle friends); but none the less kept on going and to this day he says the worst part of the whole affair was having to ride on the bike snug behind me to boise. i think maybe once  the shock of the wreck wore off the kiss kinda freaked him out a little. oh well.

lisa and i go to new york twice a year to see her doctor. we have a few good friends there and have stayed a couple of different places over the past 6 years and 12 visits to manhattan; but cmack and tenitia’s house is home to us. they are family and i’ve become pretty possessive of my room there. tenetia always has shopped for lisa before we get there and has the juicer ready, the coffee maker in the bathroom; it gets so i don’t know which is home away from home; portland or their house.

the macks became friends before they moved to nyc around 2002. but in 2003 during one of the greatest drama of our lives they became close friends, family, partners. people i could die with. cmack was one of what i’d call my ‘suicide watch’. i’ve never wanted to hurt myself, and far be it for me to make light of that state of mind; but i had a few friends who were not so sure what i  might do in those days and they held my hand day and night.

over the years that bond has only become closer with chris. oops. cmack. he came out the first summer i lived in portland and we rented two harleys and took off with only one rule; no maps and no interstate. we headed to crater lake and made a few friends along the way: 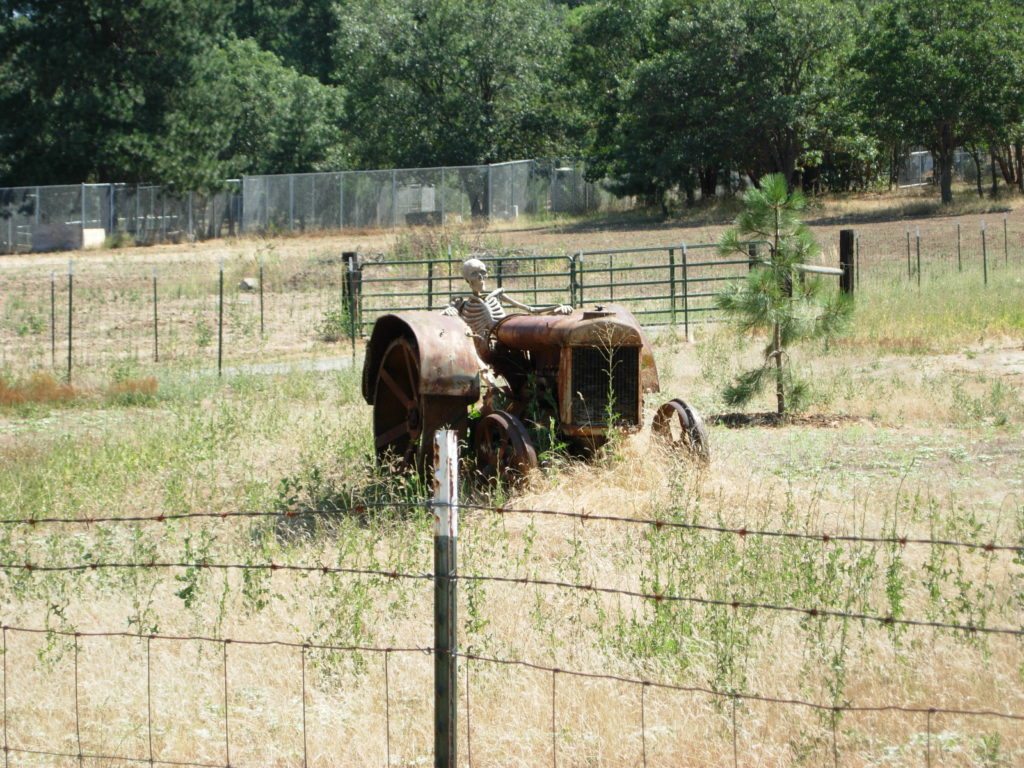 we kept going and reached the big redwood you can drive through down near klamath, california. we rode up the coast into the dark and stopped at a motel looking at the pacific ocean and c said he wanted to see old faithful. that was a ways away, but we blew across oregon and idaho and… boring, right? that’s enough travelogue. but,  that’s what we do. ever since, at least once a year. we ride and laugh. yeah, we pray and talk and preach and fart and snore; but we ride and laugh mostly. puts our battles with cancer and finances and brotherhood and racism into perspective.

greg started riding, and began flying out to ride, too. and in time the rest of the suicide squad saddled up: 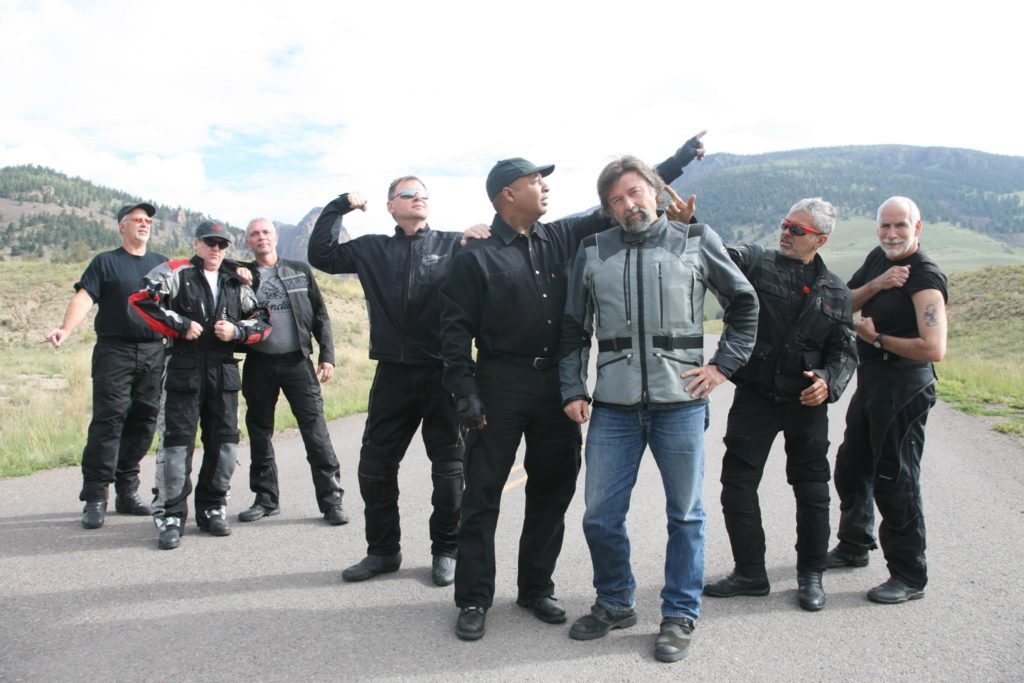 but let it be written and let it be known, it was cmack showed up that first summer to pull me out of the doldrums and hit the road. happy trails to all ye who know of what i’m speaking. to those of you who don’t…well you quit reading a while ago anyways. yolo kids. yolo.