actually you have to go back to the day before easter of the year before we got married; april 17, 1976.  but if i don’t stop with this ‘you have to go back’ stuff i’ll try to get you to go all the way back to july of 1957 when a little girl was born on an air force base in sumter, south carolina. a lot goes into a child being born but most of what brought that little curly headed girl here, i’m convinced anyways, was a young mom in arkansas praying for 2 years, and then every day of the rest of my life for the girl i’d marry… my mom was praying for lisa rowe but wouldn’t learn the name for 20 years.

…but let’s just go back to the day after valentine’s day in 1977 when i grabbed lisa and lead her out to my old 68 mustang and then drove out of town on the icy blacktop, turning off on a dirt road that ran along the side of a snowy corn field; stopping by the edge of the woods; a winter stripped forest of bare trees way  out in eastern illinois. this was the place where i told her she was going to marry me.

“marry you? when is this going to happen?” she was laughing and looking at me, then she’d turn away and look quick out the window and then back at me, again. when she’d look at me she would do what she’d done from the first day i met her: her brown eyes would focus on one of my eyes, then dart to the other…then back on the first one again…back and forth…rapid…kinda crazy; kinda dizzying; totally beautiful.

“ha,” she dismissed me and looked  back out the window and i reached for her and turned her back to look at me. those old mustangs had bucket seats and i had to stretch just a little to pull her towards me, not too far of course, it was pretty tight in the mustang, but i had to reach and turn her to face me and i said, “before the year is over.” she just shook her head with a disbelieving laugh. i’m sure there was some kissing involved at that point, but she was still not taking me seriously; she had been as adamant as i had been about not wanting to get married. that was one of the great things we had in common, right? but what i remember most was how quiet it was driving back out of that frozen field into town.

of course, before the year was over she married me.

i’ve been real lucky in my life, and then, there have been times when i’ve been real, real, really over the top, extraordinarily lucky. nothing tops the brilliance of not asking her to marry me. she never even had a chance to say no.

lisa was 18 when i met her, 20 when i married her. i have always been old and was a full 22 on our wedding day and had already lived a couple of lifetimes. but i never even started living until i met her.

and it’s hard to remember a time in my life when i didn’t know her. in my memory i can even get confused. she’s become a part of my childhood even though she was never there. i see her watching in most of my memories. and i watch her playing in her backyard when she was just a child, even though i know i was hundreds of miles away…wasting precious time until i met her. like doing penance in reverse, just existing until i started living with lisa rowe. it’s like the girl my dear mother prayed for was watching over me somehow, keeping me from seriously falling for anyone else.

like most teenage boys who pick up a guitar to try and impress girls, i started trying to play one when i was 14. i’ve never been good at it, but i always liked to make up songs and in the fall of 1975 i had this weird feeling something was about to happen. i’d already formulated a plan for my life. i was going to buy an old shrimp boat and convert it  into a small cargo vessel. then i was going to import leather and wood souvenirs from ecuador until i’d made enough money to buy a sail boat. then i was going to live in the caribbean and preach from island to island; never marrying… me, celibate, ha…

by the beginning of 1976 that weird feeling was growing stronger and i picked up my guitar and made up a song about a girl i hadn’t met yet who was going to walk into my life and wreck my perfect plan for drifting around the world. i wrote a song about lisa before i ever met her. the words to that song are inscribed inside our wedding bands.

we met in a pizza place the day before easter in 1977. i was wearing a blouse…long story. she was wearing next to nothing…short story: halter tops!!!

the next day she came to lunch with me and i did magic. i’m not bragging, i really did a magic trick with an invisible deck of cards…it must have been real magic…she’s been with me ever since. i don’t miss drifting the world without her.

she’s my boat. always has been. 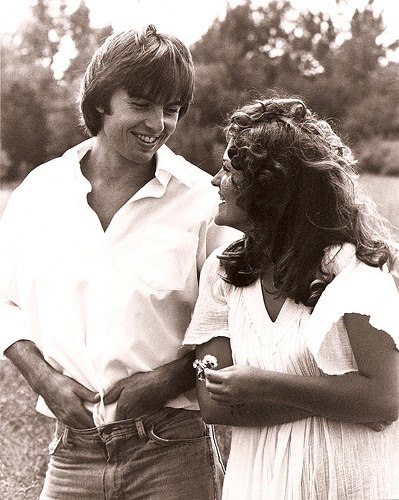 About the Author
Steve has been a minister for almost 5 decades; and for more than 40 years married to the wife of his youth and partner, Lisa. Steve has spoken in Madison Square Garden. He's swam the Hudson River to raise money for his favorite charity. He’s the writer, producer and director of an award winning short film. He’s an author, speaker, and father whose messages are hilarious, soulful and life changing. When he's not trying to sell, ride or make friends on a motorcycle, you can find him in Portland, Oregon where he is happily serving with the https://portlandchurch.org
Social Share
7 Comments