i’ve never considered myself a good salesman. people have often said i could sell ice to an… and the rest of that saying is racist; which just goes to show, people often don’t know what they’re talking about and shouldn’t be saying what they’re saying. i probably should hear what i just wrote and stop now, but i’m like most people.

i don’t like selling stuff. i do like talking. and i do like giving away things, like my opinion. i like talking people into things. i don’t know why. i never considered myself a leader. i just liked getting people to do what i wanted to do. it’s been a blessing or a curse my whole life, depending on whether you’re someone i talked into something or not. depending on how much fun you had when i talked you into it.

i talked lisa into marrying me. best talking into something i ever accomplished. good on me.

(for your own poster sized copy of this great b/w photo of young love send me $1000 and self addressed envelope, and a lock of hair from a new born baby with a birth mark on his/her left cheek)

like any self centered person, i usually think that it’s good for you to listen to me. i’m not proud of all of this; just trying to be a little more self aware before i die. sometimes it’s been good when i was listened to. other times, i’m sure it wasn’t good.

(have you bought your tickets yet? we have wheelchair accessible seating here: https://upsidedown2016.ticketleap.com/wheelchair-accessible-seating/dates/Jul-07-2016_at_0800PM#/)

i don’t talk people into some things as a matter of conscience. i know, though it’s my goal to be a christian before i die, along the way certain parts of my conscience got seared with a hot iron. jump to any conclusions you’d like; i’m mostly talking about speed limits and crossing double yellow lines in the middle of nowhere. but i don’t talk, won’t talk, people into riding motorcycles. that’s a burden i’d prefer not bear. but i include this picture just to keep some people looking. (and you can buy it, too. contact https://steve@stevenlesliejohnson.com, subject: sell me your motorcycle, steve!) 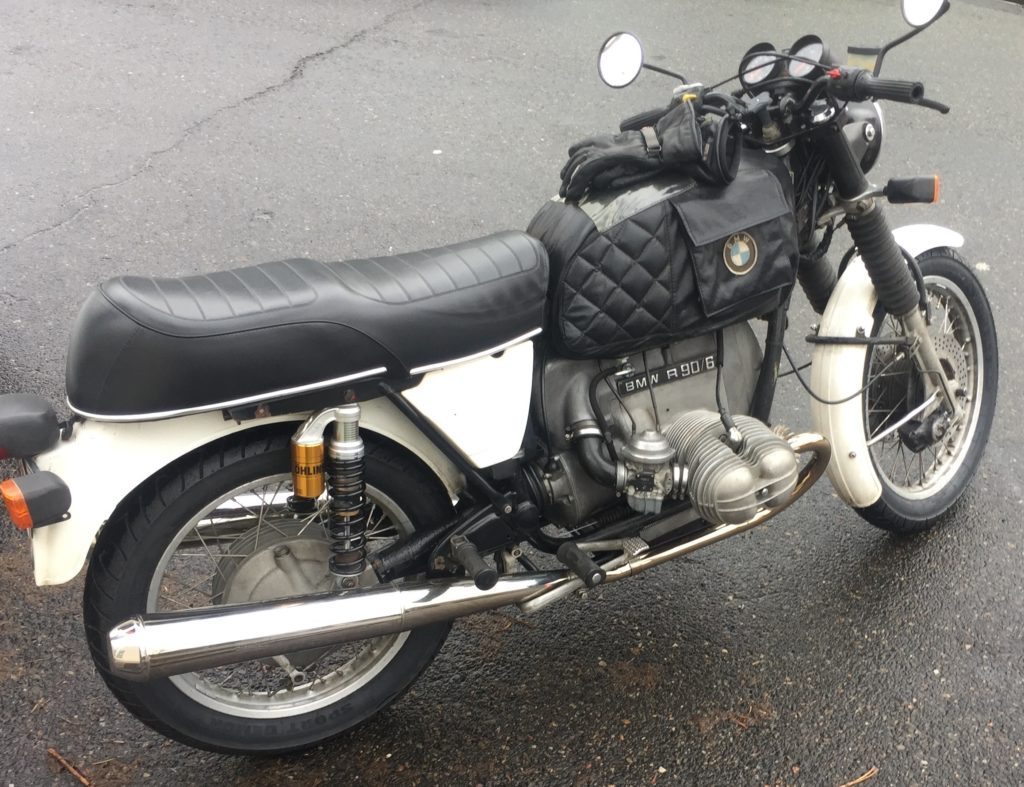 i talked sherwin into a lot of stuff over the years. it wasn’t that hard. he’s a genius and they’re pretty easy to talk into stuff because they don’t really think that much about earthly things. their minds are elsewhere doing genius things while i’m trying to figure out where i want to eat next.

the best thing, i think, that i talked sherwin into was writing upside down with me. what i really wanted was for debbie and sherwin to be in nyc with us. i wasn’t really sure what i was doing but i knew if sherwin was there things would be a lot better. and i was right. and i think he never regretted that i talked him into that. in fact, maybe he maneuvered for me to talk him into it. wait a sec, never thought of it that way. at any rate, having sherwin and debbie in nyc with us was wonderful from the start and before long we were writing a little show that we had no idea would follow us through the better part of our lives. 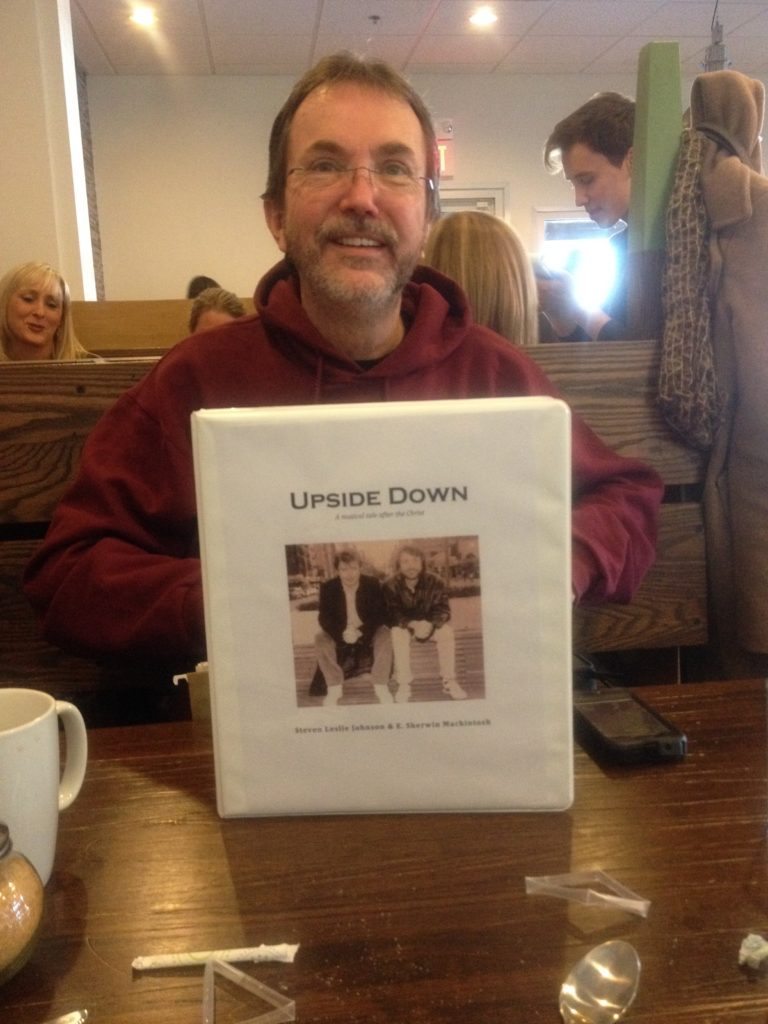 (buy your own copy of the original script of upside down by contacting https://sherwin@upsidedowntheatre.com and sending a bucket full of unobtainium)

so here we are, doing it again. fwiw, we didn’t know what we were doing the first or second time. even with sherwin being a genius and all, we weren’t really musical theatre people. but over the years it seems like we’ve become people who’d really like to be musical theatre people. and this time working on upside down we have done some things we’ve always wanted to do. because of its history and the fact that we have an audience, perhaps a small audience, of people who have strong opinions about what the show entails, then we haven’t really done everything we might have liked to do. if we starting over from the very beginning i’d certainly be telling a different version of the story. back 30 years ago i had a very simplistic view of most bible things, and a very misogynistic approach to life. three decades and two daughters later i have a much different view.

this version of upside down is in many ways true the original production we did in ’87. in many ways, it’s like nothing we’ve done before. we’ve always been blessed with great people to work with. this time is no exception. we have a  great cast and a great venue. and apparently there’s a lot of people with a great desire to see what we’re up to. the tickets have been selling well, i think. i don’t have much to compare it to. i have two friends who are rock stars and their shows sell out a year in advance with almost no notice, so we’re not rock stars, sherwin and me. on the other hand, in our little world, we’re accustomed to everybody waiting until the last minute to register for conferences, buy tickets, pick up their kids after church; i’m not accustomed to the clientele in our fellowship of churches to book ahead very much. this experience has been different in that way, and very encouraging.

at this moment we only have 88 total mezzanine seats available for our show in july. the orchestra and boxes sold out first for all five shows. now the mezzanine seats seem to be the most desirable but there’s only 88 still available and ticket prices go up in 16 days. 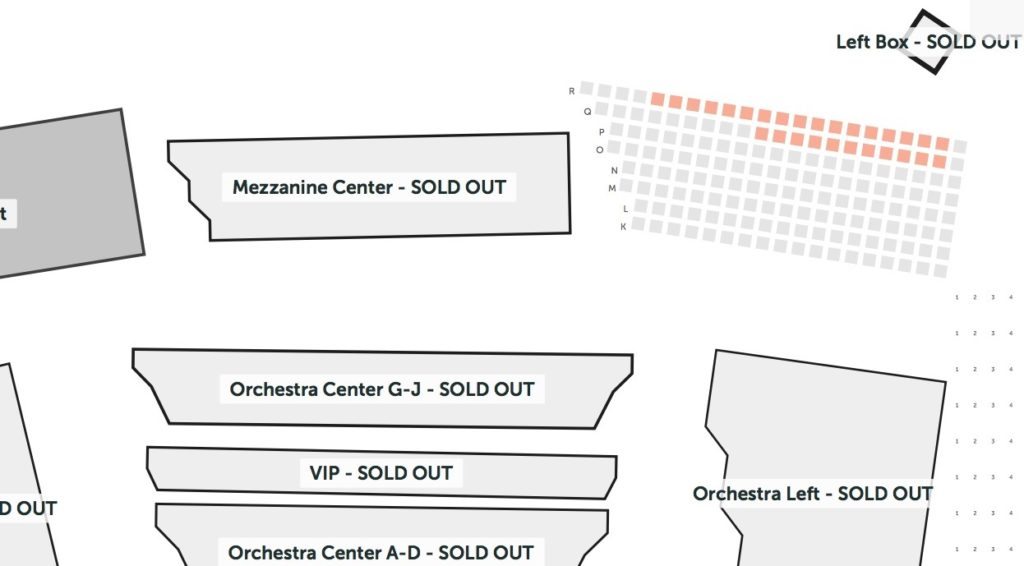 saturday matinee: mezzanine sold out… this show is almost entirely sold out. in fact only the last two rows the upper tier has partial availability. i just counted the remaining seats; about 100 spread out across the very back. see the picture. i took this pic from the seat furthest from the stage on the audience right side. when i sneak in to watch the show i’ll be standing behind this seat. it’s my favorite.

sunday matinee: plenty of mezzanine seats yet available. this is going to be a fun show. hey, they’re all going to be fun, but this is our final show of this run. last down, ball on the one yard line; seconds on the clock. game almost over. everyone from the conference who hasn’t gone home yet, my local st. louis friends, the cast… this will be a party. this will probably be the very last show to totally sell out and it’s going to be a hoot.

so, if i were going to try and talk you into anything at this point i guess it would be that if you think you’d like to see this with a group of friends now is the time to buy your tickets.

if you took the time to read this far i know what some of you are thinking, and you’re wrong. you’re thinking steve isn’t a musical theatre guy. he’s not even a preacher. he’s just a used car salesman (that’s not a racist stereotype, just mean and judgmental. used car salesmen are people, too. ) he’s spent all this time just to give a sales pitch. he ought to be out doing his job instead of sitting on his brains typing out this junk.  but again i say, you’re wrong.

i’m old and this is a word press based web site. if i don’t spend about 30 minutes a month doing something like this i completely forget how it works. buy a ticket, don’t buy a ticket; judge me– whatever. i like to talk.