I live on Peacock Lane, four blocks sandwiched between Belmont and Stark. If I head north out of my driveway and take a right turn on Stark, in about 15 minutes I’m on one of the most scenic country lanes you’ll ever see. Before hitting the Stark Street Bridge at the eastern most end of the road, you’ll pass at least 3 small, yet very picturesque, waterfalls. 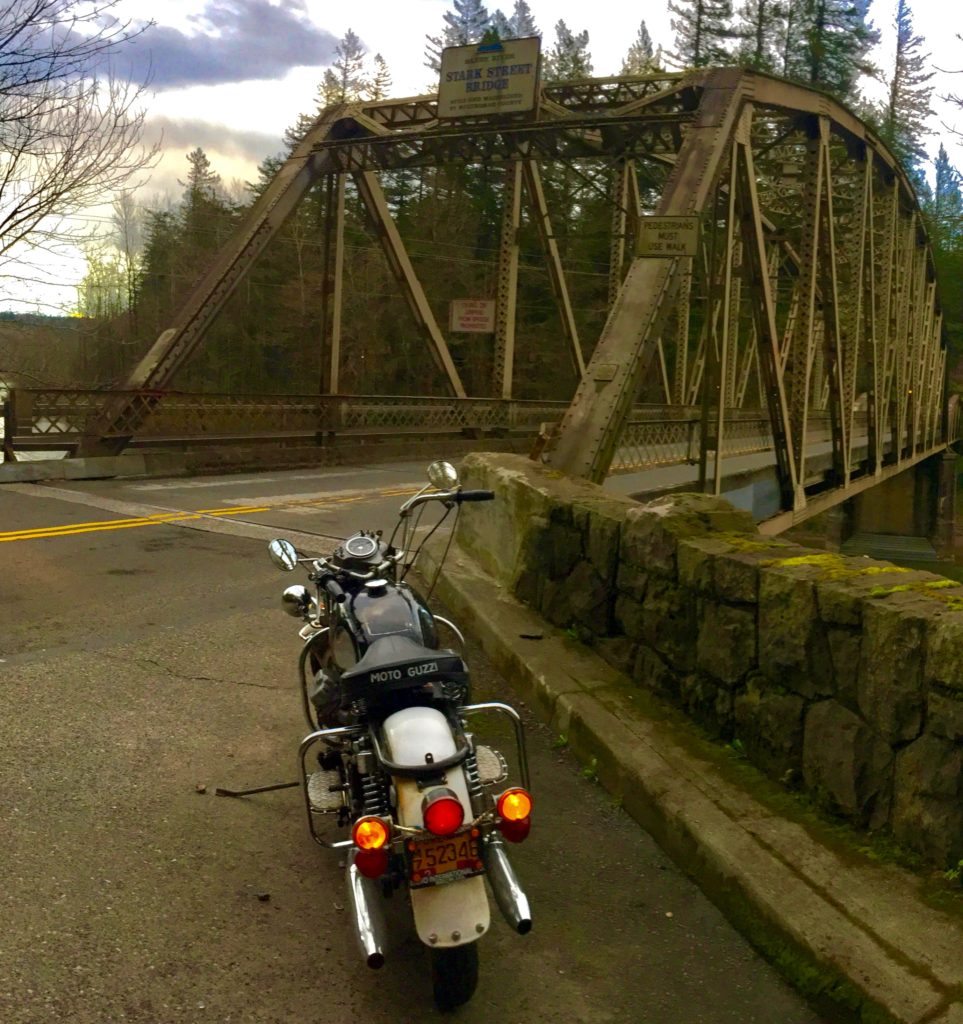 I bought this bike from Dave Richardson of Guzziology fame. https://www.motointernational.com/our-story/dave-richardson-and-guzziology  Dave got an old, very decorated police ambassador road ready for me. I should have known the old bike had some issues, if only because Dave seemed so happy to get rid of the thing. 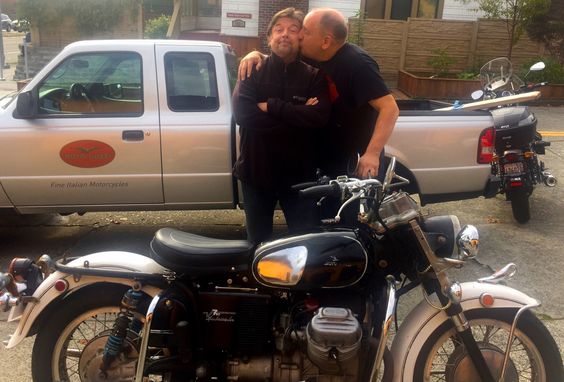 Seriously, Dave is a great guy, a decent kisser and I love this bike. However, a few more touches were needed to make the ’71 a truly “ready to ride anywhere” machine and my buddy Daric Cheshire, of Cheshire Motors https://cheshiremotorsports.com , added new shocks, a new exhaust and sorted out some electrical problems and not to mention a few other issues.

This bike will be for sale sometime this summer, 2017. A good friend of mine from Montreal has secured it for a cross country ride. After that we’ll give it a new set of tires, tune up and fluid change and put it on the road for another few thousand miles. 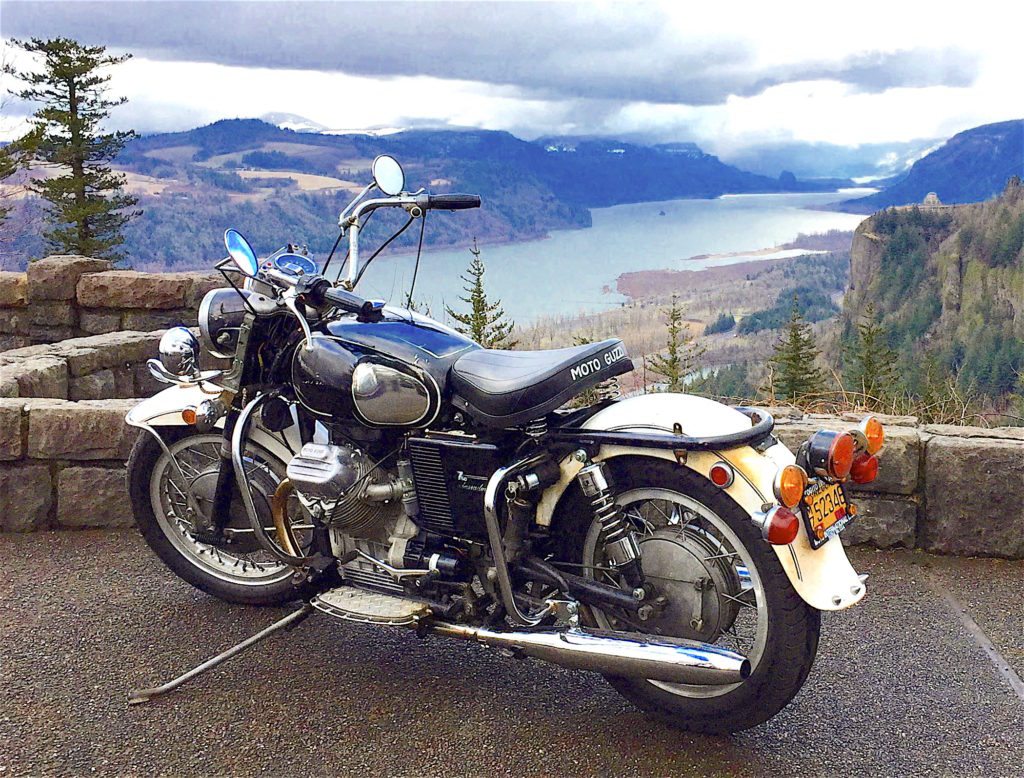 I’m slowly ‘un-decorating’ it; still have the foot boards to restore and a few more spikes… bullet shaped doodads… to remove. The speedo needs to be repaired, it quit on my ride down from Seattle just before I passed the exit for PIR, and has been stuck at just nearly 46k miles for the last 875 miles; so, there’s that.

The numbers match on title, engine and frame. The paint is original. It’s ‘all there’, we’re not missing anything. The ignition is under your left thigh… 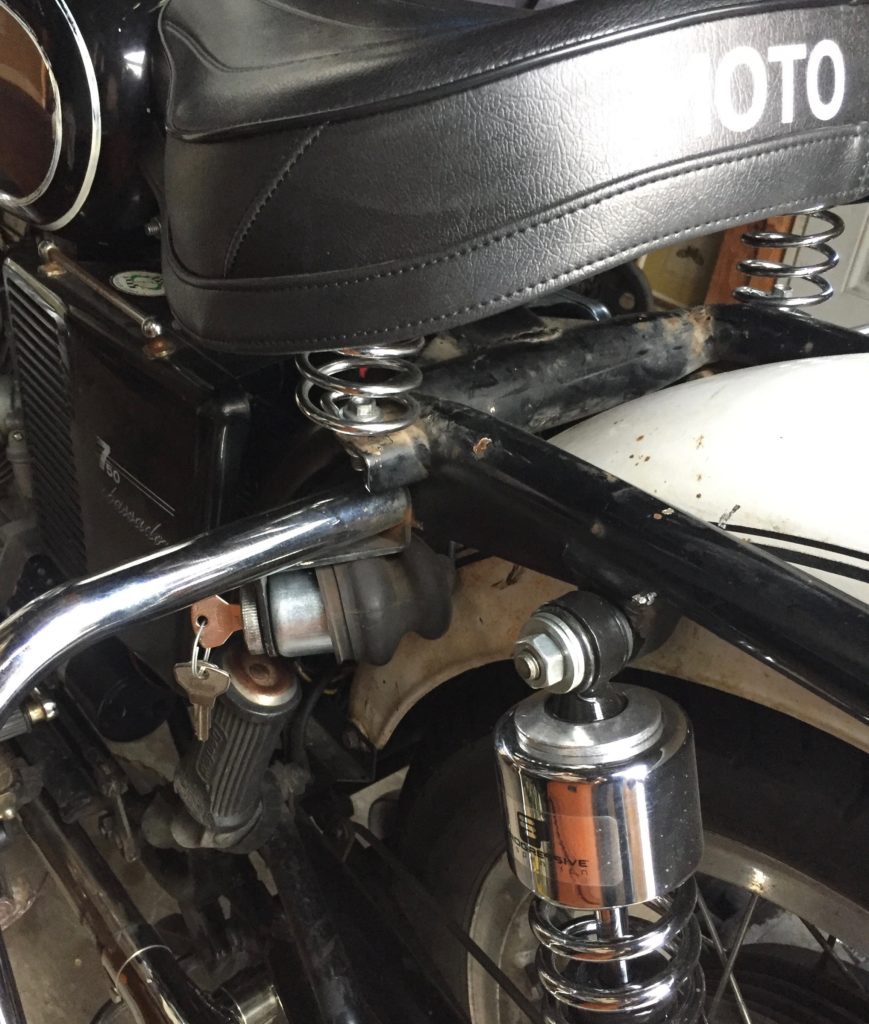 …. and you also have an ignition button under your right thumb… 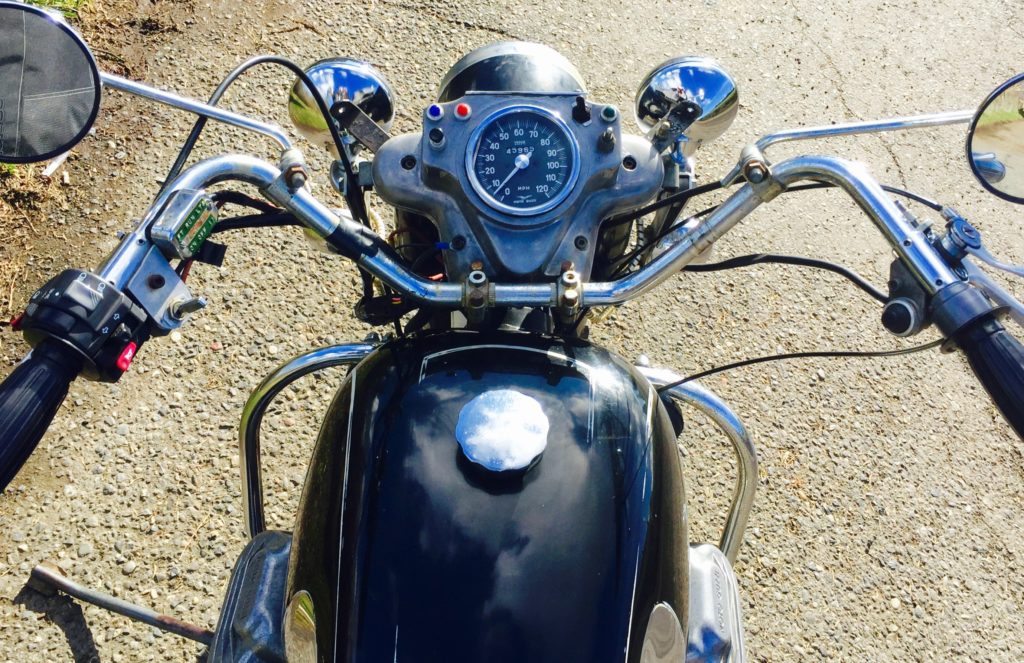 just in case your stopped on a hill in San Francisco and it dies… think about it. 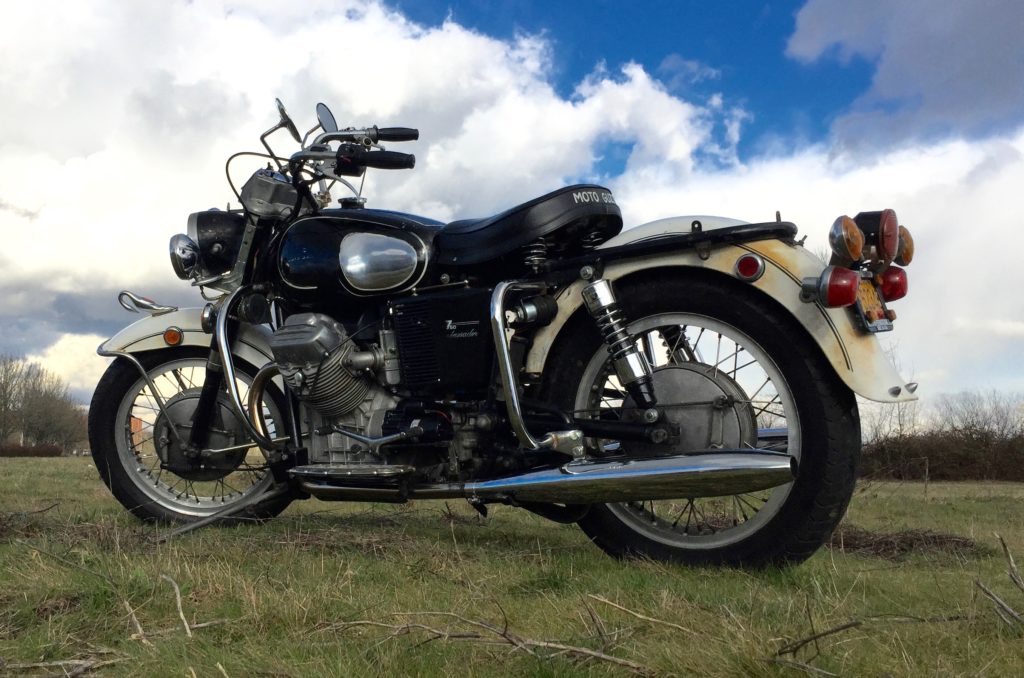 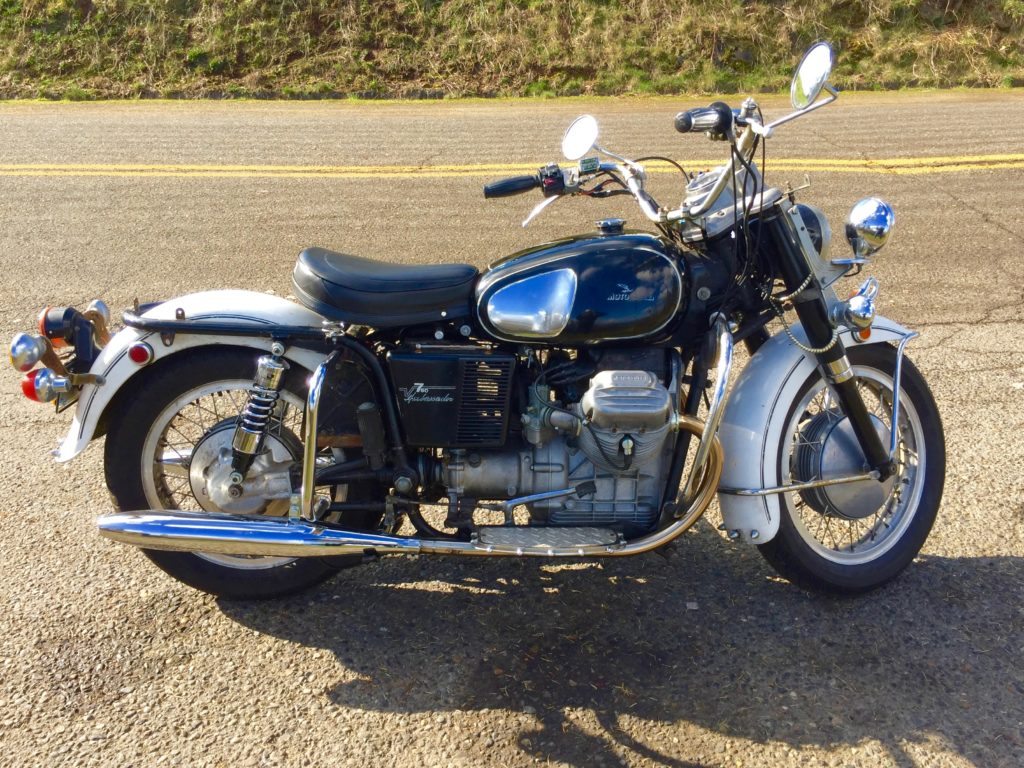 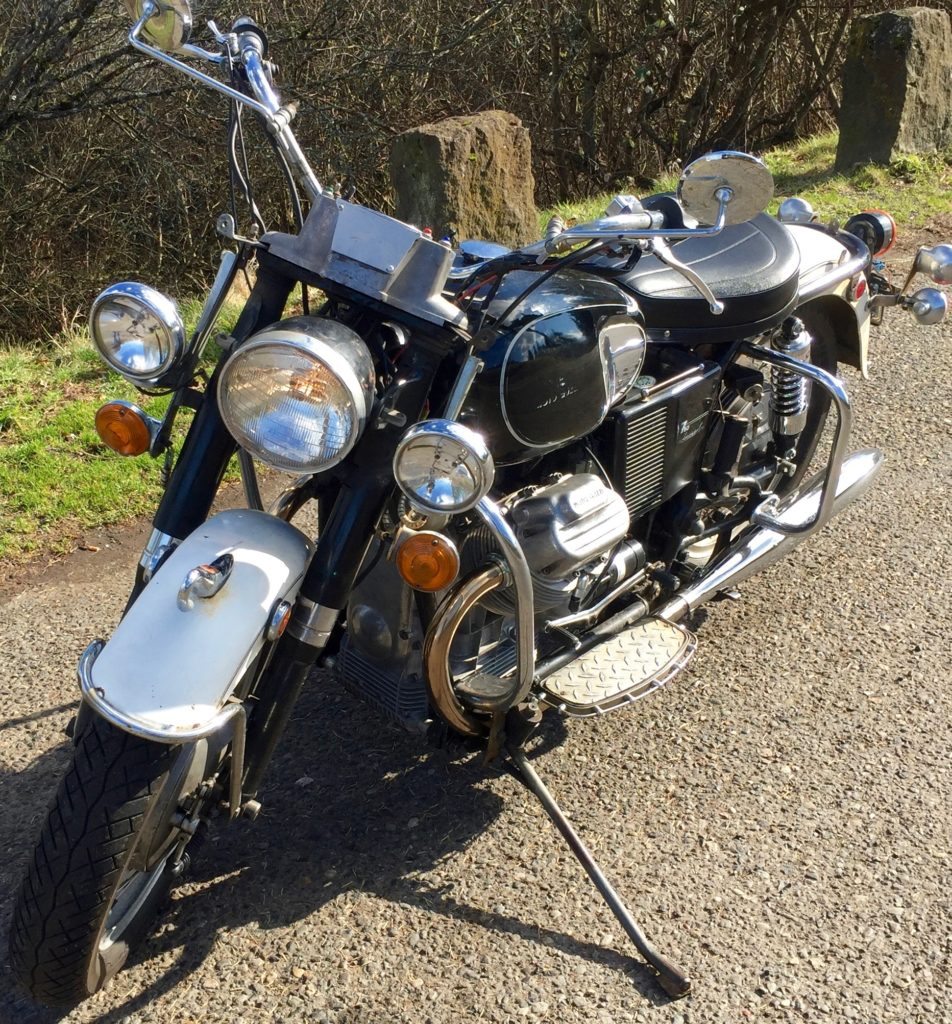 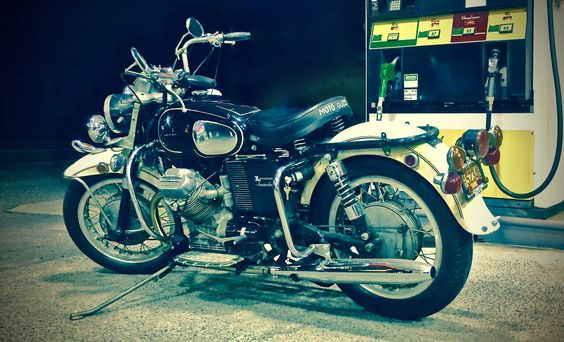 This is an authentic, patina laden, funky goose. A big bore kit was added by prior owner, it’s still a four speed, but it’s as big as the Eldorado and has lots of torque and pickup and will keep up with fastest traffic; you can pass just about anybody if you want to. It’s stable with no wobble at 100mph but most fun on two lane country roads with lots of twists and turns.