Part 1: The Journey to Jerusalem is about to begin in earnest.

When the uproar had ended…

2 hours of shouting in the Ephesian theatre, then the city clerk dismisses the assembly.

…Paul sent for the disciples and, after encouraging them, said goodbye and set out for Macedonia. 2 He traveled through that area, speaking many words of encouragement to the people, and finally arrived in Greece, 3 where he stayed three months. Because some Jews had plotted against him just as he was about to sail for Syria, he decided to go back through Macedonia. 4 He was accompanied by Sopater son of Pyrrhus from Berea…

A son of one of the ‘more noble ones’ in Berea? Pyrrhus is definitely a Greek name, so either he’s a Hellenistic Jew and one of the first noble Bereans, or he’s a gentile. The name was common. Who can guess which word we get from that name and why? But Sopater was just as likely a young gentile who’s father was one of the first gentile converts in Berea.

By the way, Berea must have been unique in Paul’s mission to the gentile world. The ‘more noble’ ones, the Berean Jews, were in the synagogue when Paul first preached and may have constituted the largest group of initial Jewish converts in one place at that time.

…Aristarchus and Secundus from Thessalonica…

Aristarchus means aristocrat, and he probably was. He was Macedonian, from Thessalonica; that’s a footnote from Luke in chapter 27 because Aristarchus is with him as he’s leaving Caesarea for Rome.

Secundus was a popular slave name. Primos was a common name for the top slave; Secundus was number 2. These two, Aristarchus and Secundus, were possibly owner/master before they were disciples for the Lord. Now they are partners. The ground is level for everyone at the foot of the cross.

…Timothy also, and Tychicus and Trophimus from the province of Asia…

Timothy and Tychicus will be synonymous with the church in Ephesus; both served there for years. Trophimus was from Ephesus, and though he has scant mention he is one of the 8 friends who traveled extensively together. He will innocently be the cause of Paul’s arrest, coming up when Paul gets to Jerusalem.

Note that there were 8 of them that we know of. When you include Paul and Luke, there were 8; they could always go 2 by 2 in whichever new place they came to in order to spread out and spread the word of Jesus.

Incidentally, we won’t see Silas again. Last seen in Corinth, this wonderful brother who stepped in to accompany Paul at an emotional time back in Acts 15 is heard from no more. He must have been an extraordinary guy. He seems to have been well known in the Jewish Christian world, for along with Judas Barsabbas, he was sent as a credibility reference for the letter sent out from the council in Jerusalem. He endured beatings, jail, and all the other occupational hazards that go along with being Paul’s companion and a messenger for the Lord.

TODAY’S TAKE AWAY NUMBER ONE: choose a partner in the gospel. Don’t go it alone; have a best friend share the mission. A friend is that one phone call you get when you’re arrested and you go to jail. But a best friend is sitting next to you in the cell saying, “That was a hoot! Let’s get out and do it again!”

5 These men went on ahead and waited for us at Troas. 6 But we…

Here Luke uses “we” again. He’s joined up with Paul for this dramatic march. Watch for the ‘we’.

…sailed from Philippi after the Festival of Unleavened Bread, and five days later joined the others at Troas, where we stayed seven days.
7 On the first day of the week we came together to break bread. Paul spoke to the people and, because he intended to leave the next day, kept on talking until midnight. 8 There were many lamps in the upstairs room where we were meeting. 9 Seated in a window was a young man named Eutychus, who was sinking into a deep sleep as Paul talked on and on. When he was sound asleep, he fell to the ground from the third story and was picked up dead. 10 Paul went down, threw himself on the young man and put his arms around him. “Don’t be alarmed,” he said. “He’s alive!” 11 Then he went upstairs again and broke bread and ate. After talking until daylight, he left. 12 The people took the young man home alive and were greatly comforted.

13 We went on ahead to the ship and sailed for Assos, where we were going to take Paul aboard. He had made this arrangement because he was going there on foot. 14 When he met us at Assos, we took him aboard and went on to Mitylene. 15 The next day we set sail from there and arrived off Chios. The day after that we crossed over to Samos, and on the following day arrived at Miletus. 16 Paul had decided to sail past Ephesus to avoid spending time in the province of Asia, for he was in a hurry to reach Jerusalem, if possible, by the day of Pentecost.

This town was an interesting lay over station for Paul. He would leave a sick Trophimus there at some point.

TODAY’S TAKE AWAY NUMBER THREE: Be a good guest where ever you go; you never know but you may need them to care of you some day.

…Paul sent to Ephesus for the elders of the church. 18 When they arrived, he said to them: “You know how I lived the whole time I was with you, from the first day I came into the province of Asia. 19 I served the Lord with great humility and with tears and in the midst of severe testing by the plots of my Jewish opponents. 20 You know that I have not hesitated to preach anything that would be helpful to you but have taught you publicly and from house to house. 21 I have declared to both Jews and Greeks that they must turn to God in repentance and have faith in our Lord Jesus.

22 “And now, compelled by the Spirit, I am going to Jerusalem, not knowing what will happen to me there. 23 I only know that in every city the Holy Spirit warns me that prison and hardships are facing me. 24 However, I consider my life worth nothing to me; my only aim is to finish the race and complete the task the Lord Jesus has given me—the task of testifying to the good news of God’s grace.

25 “Now I know that none of you among whom I have gone about preaching the kingdom will ever see me again. 26 Therefore, I declare to you today that I am innocent of the blood of any of you. 27 For I have not hesitated to proclaim to you the whole will of God. 28 Keep watch over yourselves and all the flock of which the Holy Spirit has made you overseers. Be shepherds of the church of God, which he bought with his own blood.[b] 29 I know that after I leave, savage wolves will come in among you and will not spare the flock. 30 Even from your own number men will arise and distort the truth in order to draw away disciples after them. 31 So be on your guard! Remember that for three years I never stopped warning each of you night and day with tears.

32 “Now I commit you to God and to the word of his grace, which can build you up and give you an inheritance among all those who are sanctified. 33 I have not coveted anyone’s silver or gold or clothing. 34 You yourselves know that these hands of mine have supplied my own needs and the needs of my companions. 35 In everything I did, I showed you that by this kind of hard work we must help the weak, remembering the words the Lord Jesus himself said: ‘It is more blessed to give than to receive.’ ”

36 When Paul had finished speaking, he knelt down with all of them and prayed. 37 They all wept as they embraced him and kissed him. 38 What grieved them most was his statement that they would never see his face again. Then they accompanied him to the ship. 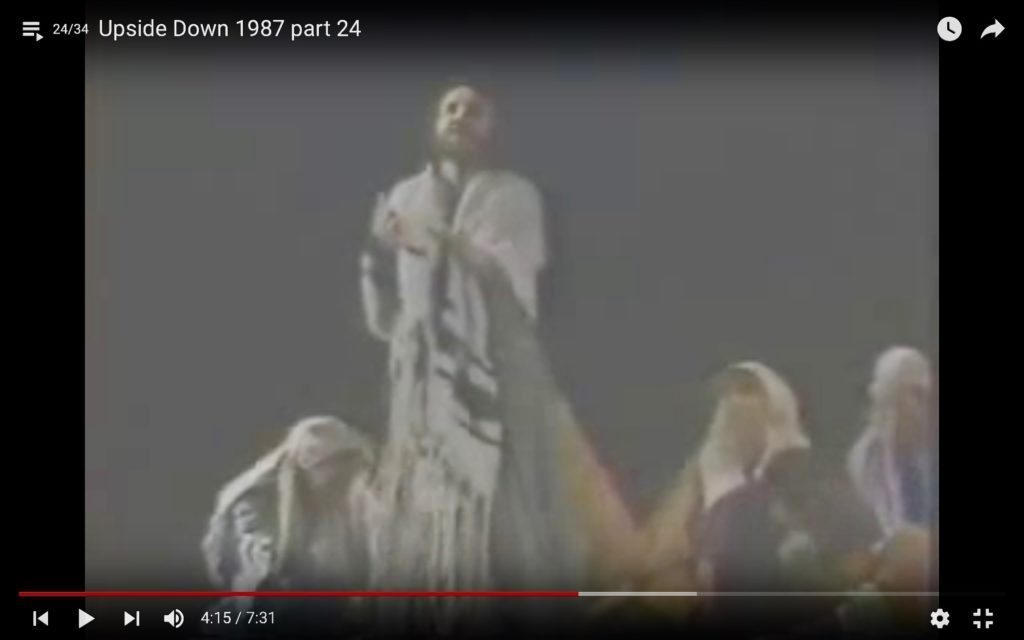 In 1987 our show followed the story of Paul much closer, and this march to Jerusalem was one of the most passionate moments in our tale. And what an awesome actor, singer, performer we had playing Saul/Paul; of course that was Sherwin. Sherwin wasn’t just my partner in writing the show, he was a leader and example on and off the stage of following Jesus; as he still is all these many, many, many…many years later.

In another life I think Sherwin and I would grow up together and be writing songs as children. And riding motorcycles. That would be another, very interesting, and wonderful life. 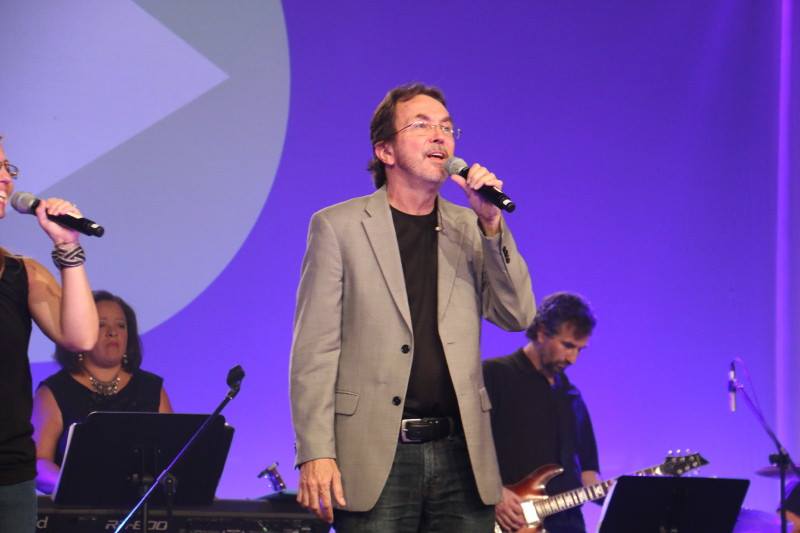 I asked Sherwin to lead us in prayer. He said, “Yep.” Let’s pray:

We thank you so much for this opportunity to study more about the first century church thank you so much for Steven for the incredible job that he is doing; just helping us to see the Scriptures come alive and to understand in a very real way what the earliest disciples felt and what they went through following Jesus in their day.

At this time I’d like to pray that you would be with some specific things about our show. This week, with so many people traveling, please just get us there all safely.  I feel like there’s been so many dark forces that are working against us; Satan really doesn’t  want this show to happen, and we need you, Lord!
I pray that you would be with all of the department heads: with costumes,  light, sound, sets, and props. That you would be with the orchestra and especially be with our drummer. Please be with Wendy Cavett, our conductor, we are so proud of her, and thankful to you,  that she was able to be part of the show “Hamilton”. You are amazing father, and have pulled together so many or our talented and amazing friends to work together now. So at this time I’m just asking you to please  pull all these departments together, that all the things we been working on separately will be able to converge in St. Louis and just for all the parts of the body to be present and to be working together for your glory!
Can I pray that you would help us in telling the story,  the old old story of Jesus and his love. Thank you for Steven, for the way that he’s able to  interpret the story in a new and fresh way, much like Jesus would tell a parable. I’m praying that you help the message to come through, and to help us to see baptisms into Jesus as a result of the show. Thank you so much for each person who is sacrificing to be with us in St. Louis. We love them all so much and we love you so much and want to bring glory to you!