We’re deep in rehearsals now, folks. Most of our cast has made it here to St. Louis, but we’re still looking forward to getting our lovable stragglers here safely over the next few days. At any rate, in less than two weeks we’ll open our show. Here’s our gang so far: 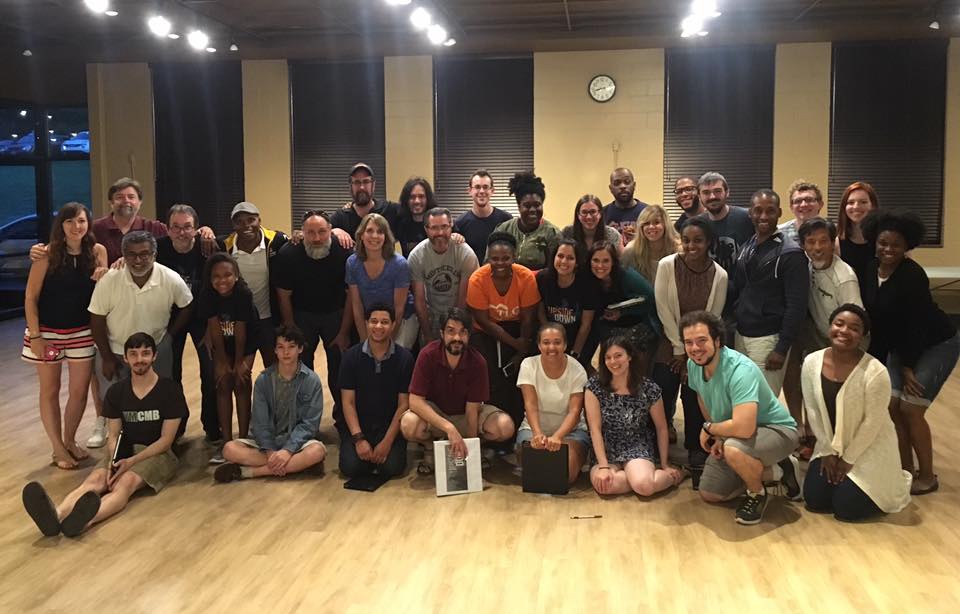 We covet everyone’s prayers. Let’s continue our reading of Acts with a few less comments from me, but first let’s begin with a prayer:

Our Father in heaven,

We come to you with love and respect and requests. Always requests.

Please, allow the scriptures to come alive and speak to us. Help us please to clear our minds, open our hearts and be inspired to do things we wouldn’t think to do without input from your word. As we get even busier with all the issues involved in staging this show, please help us stay close to you.

We have financial issues, help us not to worry.

We have illnesses, help us not to doubt.

We have drama going on in our own lives, please help us not be distracted and allow weeds to grow up and choke our faith.

At this time please help us as we simply read your word and draw near to you and to each other.

In Jesus name we pray,

So, here we are, back with Paul. He’s escaped Jerusalem, is being held in Caesarea, but the powers that be are still trying all they can to kill him.

Five days later the high priest Ananias went down to Caesarea with some of the elders and a lawyer named Tertullus, and they brought their charges against Paul before the governor. 2 When Paul was called in, Tertullus presented his case before Felix: “We have enjoyed a long period of peace under you, and your foresight has brought about reforms in this nation. 3 Everywhere and in every way, most excellent Felix, we acknowledge this with profound gratitude. 4 But in order not to weary you further, I would request that you be kind enough to hear us briefly.

5 “We have found this man to be a troublemaker, stirring up riots among the Jews all over the world. He is a ringleader of the Nazarene sect 6 and even tried to desecrate the temple; so we seized him.  8 By examining him yourself you will be able to learn the truth about all these charges we are bringing against him.”

9 The other Jews joined in the accusation, asserting that these things were true.

10 When the governor motioned for him to speak, Paul replied: “I know that for a number of years you have been a judge over this nation; so I gladly make my defense. 11 You can easily verify that no more than twelve days ago I went up to Jerusalem to worship. 12 My accusers did not find me arguing with anyone at the temple, or stirring up a crowd in the synagogues or anywhere else in the city. 13 And they cannot prove to you the charges they are now making against me. 14 However, I admit that I worship the God of our ancestors as a follower of the Way, which they call a sect. I believe everything that is in accordance with the Law and that is written in the Prophets, 15 and I have the same hope in God as these men themselves have, that there will be a resurrection of both the righteous and the wicked. 16 So I strive always to keep my conscience clear before God and man.

17 “After an absence of several years, I came to Jerusalem to bring my people gifts for the poor and to present offerings. 18 I was ceremonially clean when they found me in the temple courts doing this. There was no crowd with me, nor was I involved in any disturbance. 19 But there are some Jews from the province of Asia, who ought to be here before you and bring charges if they have anything against me. 20 Or these who are here should state what crime they found in me when I stood before the Sanhedrin— 21 unless it was this one thing I shouted as I stood in their presence: ‘It is concerning the resurrection of the dead that I am on trial before you today.’”

22 Then Felix, who was well acquainted with the Way, adjourned the proceedings. “When Lysias the commander comes,” he said, “I will decide your case.” 23 He ordered the centurion to keep Paul under guard but to give him some freedom and permit his friends to take care of his needs.

24 Several days later Felix came with his wife Drusilla, who was Jewish. He sent for Paul and listened to him as he spoke about faith in Christ Jesus. 25 As Paul talked about righteousness, self-control and the judgment to come, Felix was afraid and said, “That’s enough for now! You may leave. When I find it convenient, I will send for you.” 26 At the same time he was hoping that Paul would offer him a bribe, so he sent for him frequently and talked with him.

27 When two years had passed, Felix was succeeded by Porcius Festus, but because Felix wanted to grant a favor to the Jews, he left Paul in prison.

1). The more you attempt to advance the gospel, the more opposition you will face. Don’t be surprised. If you make no attempt, you will not face opposition. If you are not facing opposition, are you attempting?

2). Take the opportunities presented to you, you never know which one will be your last.

3). It’s never convenient to obey the gospel. Sometimes, it’s not convenient to share the gospel. Convenience is high priced milk at the corner store, micro wave ovens, and remote controls. If you can’t do something hard, is life really worth living? Are you going to do something, or just keep standing there shaking?