In those days when the number of disciples was increasing, the Hellenistic Jews[a] among them complained against the Hebraic Jews because their widows were being overlooked in the daily distribution of food. 2 So the Twelve gathered all the disciples together and said, “It would not be right for us to neglect the ministry of the word of God in order to wait on tables. 3 Brothers and sisters, choose seven men from among you who are known to be full of the Spirit and wisdom. We will turn this responsibility over to them 4 and will give our attention to prayer and the ministry of the word.”

Tradition in Hebrew theology holds that when the Messiah comes he will literally come from the east. Well, cool thing is, he did. We, too, believe when he comes again it will be like lightening from the east flashing to the west (Matthew 24), but for us we believe it will be second coming, not the first. When Jesus came the first time he entered Jerusalem from the east(Mark 11 and John 12). He came from Bethany which is on the southern tip of the Mount of Olives and as he walked towards Jerusalem he sat on the donkey his disciples had already run ahead to the next village to get, as the Lord had told them to. And then he rode on in through the eastern gate of the temple courts:

This is the eastern gate as it appears today. It was sealed up in medieval times. But these walls and this gate were not built by Herod. Those walls were torn down in 70 A.D. These were probably built in Byzantine times. But it is a view from the east, and if it’s not on the spot where the gate was in Jesus day, it’s darn close.

This is a model showing a road leading to steps which go up to the gate. Jesus would have had to jump off that donkey and climb up the steps. Or maybe not https://www.gettyimages.com/detail/video/rear-view-of-boy-riding-donkey-up-stone-steps-at-stock-video-footage/96618584

There’s an in-depth theory about this bridge, which would have crossed the Kidron Valley and was built to spec so that there’s air under the feet of the folks who cross it so that they do not violate the law of not being contaminated by going through a grave yard. Which brings me to my point.

Because of the belief that the Messiah was going to come from the east, Jewish people have had a centuries long passion for being buried in the Kidron Valley. It’s primo burial real estate; the flyers say, “buy your sepulcher here and be the first to see the Messiah when he comes. But act fast, looks like lightening in the east…”

And that is why there were so many widows in Jerusalem. It was like Miami. Many men came from outside Israel to settle in Jerusalem before they died so that they could be buried in the Kidron Valley; leaving behind their widows. Many Greek Jewish folks had settled in Jerusalem in just this manner. And that gives us another detail to help us paint a picture in our minds of who some of the people getting baptized were in those early days of the church. These widows had come to bury their husbands close to the arrival point of the Messiah, only to find out that the Messiah had already come and was going to come back.

And now a dispute arose between the disciples who were more ‘local’ and taking care of the Hebrew widows verses the Greek widows, who were expats.

5 This proposal pleased the whole group. They chose Stephen, a man full of faith and of the Holy Spirit; also Philip, Procorus, Nicanor, Timon, Parmenas, and Nicolas from Antioch, a convert to Judaism. 6 They presented these men to the apostles, who prayed and laid their hands on them.

Quick, name all seven deacons without cheating. Bet you didn’t get past Stephen and Philip. That’s okay, in our show, we don’t either. I bet they all had great stories. Nicolas gets blamed, I think falsely, for starting the Nicolaitinism heresy. But truth is it was probably just the heretical group using his name to give themselves some credibility. All to say, in those days, the dude was probably well known. He was a pagan from Antioch who converted to Judaim and then becomes a disciple and is then given a billing in the big show… sorry… role in the church. That makes him the first man not born Jewish to have a major role in the story of the beginning of the church.

But we only remember Stephen and Philip, mostly because those are the two story lines Luke follows as we go on from here.

7 So the word of God spread. The number of disciples in Jerusalem increased rapidly, and a large number of priests became obedient to the faith.

This is really cool. Priests becoming disciples! They’ve finally had enough, seen enough, heard enough; they’ve seen the apostles beaten and thrown out of the temple courts and then look up and, dang! … here they come again! The power of the word and the conviction with which it was delivered has broken their tradition and pride and they become disciples of Jesus, too!

And it’s where I got the idea to make Ananias a priest in the musical “Upside Down”. I’m talking about the Ananias who later baptizes Saul in Damascus. In chapter 9, we’ll get to it, he’s called a disciple. But in Acts 22, when speaking to the Sanhedrin, Paul makes sure to drop the little factoid that Ananias was a devout observer of the law and highly respected by the Jews in Damascus. So, I wrote him out to be one of these priests who got converted here in chapter 6 and in my ‘back story’ he’s going to flee to Damascus during the dispersion coming up at the end of chapter 7. Could have happened.
8 Now Stephen, a man full of God’s grace and power, performed great wonders and signs among the people. 9 Opposition arose, however, from members of the Synagogue of the Freedmen (as it was called)—Jews of Cyrene and Alexandria as well as the provinces of Cilicia and Asia—who began to argue with Stephen. 10 But they could not stand up against the wisdom the Spirit gave him as he spoke.

11 Then they secretly persuaded some men to say, “We have heard Stephen speak blasphemous words against Moses and against God.”

12 So they stirred up the people and the elders and the teachers of the law. They seized Stephen and brought him before the Sanhedrin. 13 They produced false witnesses, who testified, “This fellow never stops speaking against this holy place and against the law. 14 For we have heard him say that this Jesus of Nazareth will destroy this place and change the customs Moses handed down to us.”

15 All who were sitting in the Sanhedrin looked intently at Stephen, and they saw that his face was like the face of an angel.

And that’s why we picked this pretty face to be Stephen in our show: 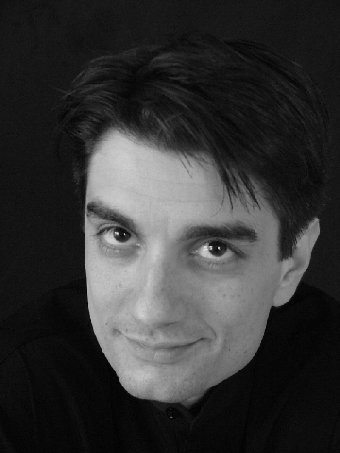 John Scamardella has been studying deep into his character, Stephen. I invited John to say ‘a few’ words about what he’s learning:

Stephen was an impressive, faithful man of God, even before his amazing speech and preceding sacrifice in Acts 7. Two things worthy of note about Stephen, specifically in this chapter, is that he’s a multi-tasker and a leader.

Stephen, the multi-tasker: The whole reason that Stephen, Philip and the five other Hellenistic Jewish brothers are employed to serve is to alleviate the burden of food distribution from the apostles. Once Stephen and the guys are given the task of “waiting tables,” you would think, according to the apostles in verse 2, Stephen wouldn’t have time for much else. Ironically, it is Stephen whom the Sanhedrin noticed and had seized later in this chapter. Why Stephen? Why not Peter or John or Bartholomew? Didn’t they have more time to preach? Somehow, he found time to do it all. Whether distributing food, sharing his faith or debating scripture, Stephen makes it happen.

Stephen, the leader: Here’s something kind of subtle. In the list of the chosen men in verse 5, Luke lists Stephen first. Why is that significant? Let’s say someone asks you about the campus ministry in your local church. At first, you speak generally about them. “They’re great,” you say. “They just had a campus Sunday and had over 3,000 visitors, all of whom got baptized.” (Or something else more real and less pretend.) If asked to list them, you usually start the list with the guy who leads. Stephen, not only gets that spot, but he gets his own little description: “a man full of faith and of the Holy Spirit.” It seems like Luke identified Stephen as the leader of that little group of big-hearted men.

To make a long story short, (too late!) Stephen is the man who God uses to catapult the spread of the gospel past the borders of Jerusalem. The early Christians in Acts would not have ventured outside Jerusalem, planting churches in their wake, had it not been for Stephen’s death. The famous quote by second century theologian, Tertullian, “The blood of Christians is the seed that grows the church,” is best embodied by Stephen’s life and death.

Father in heaven, please take care of all the brothers and sisters in the cast; please keep them healthy and more than anything Father please help us all to be like Stephen and stay faithful to the end! Please be with John and help his performance to inspire people around the world to never be ashamed of their faith and to one day see you in glory. In Jesus name…